The city of Vienna likes to present itself as hip, modern and chilled – but also with the necessary touch of art, culture and history. It is also no secret that – despite their wonderful city – the Viennese are often considered to be “grumpy” without reason. But in Vienna the transition between Viennese charm, being a little bit grumpy and politeness is usually quite fluent and very often purely a matter of interpretation.

A visitor can not usually do anything to appease their Viennese counterpart when they are really “grumpy”. However, in order to avoid the rude Viennese if possible and to experience at least a little bit of the much-cited Viennese charm, some rules of conduct can be helpful.

This old proverb is always true and for good reason. The Germans and the Austrians apparently have the same language but in reality and when travelling there are often worlds in between. Especially in Vienna.

Of course can get by in Vienna if you speak “German” German (or English for that matter!). As long as you don’t pretend to be Viennese and try to speak “Viennese” or anything similar as a visitor.

“Grüß Gott”(or “Godly greetings”) has nothing to do with religion
“Grüß Gott” is something which the Viennese automatically say, but it has very rarely anything to do with their religious affiliation. Visitors are well advised to give it a try: it doesn’t hurt and is definitely better than a Germanic “Guten Tag”.

Be particularly careful when ordering coffee
Anyone who orders a "pot of coffee", is either having breakfast in the hotel or has no idea. But more about that later. The important point: “Kaffee” (coffee) is always and without exception pronounced with a long emphasis on the E - as in the French word “café”. There's no way around it.

“Kuss die Hand” or “Let me kiss your hand”
The chances of a lady being greeted this way in Vienna are unfortunately diminishing. However, if it does happen, don’t be afraid and withdraw your hand quickly while blushing: the man will not really touch the back of your hand with his lips but only pretend to do so.

Semmerl, Sackerl and Packerl
The Viennese very often use the diminutive form, which means the words suddenly end in “erl”. This isn’t because they find the things particularly cute (in this case we are talking about bread rolls, carrier bags and packages!) but it is simply a use of language in everyday life. “German” words – like “Brötchen” or “Tüte” – are very rarely used here.

The perfect refreshment after a shopping tour on the Mariahilfer Strasse

You will definitely need some refreshment after a shopping tour on Vienna’s most famous shopping street. But even if it is just a snack in between, it should still be something special. There are numerous small shops and pop-up stores in the area which exactly fit the bill.

Out and about in Vienna

Vienna is different. This former slogan of the Vienna Tourist Board is still present everywhere. In such a short time you will not be able to delve deeply into the soul of the city of Vienna, but there are a few things which you should watch out for.

Visitors will find that Vienna has a wonderful hotchpotch of activities worth experiencing. Whether on foot, in a taxi or using public transport – you will always have authentic encounters with the locals.

Too many Mozarts on the street
“Eine kleine Nachtmusik” or not – Mozart may have been a brilliant composer, but sometimes there are simply too many Mozarts to be seen. Wolfgang may have lived in numerous apartments in Vienna, but the many colourful costumes of the gentlemen around St Stephan’s cathedral do not mean well: concert tickets are being flogged by the dozen. Better to experience some real culture!

Bum bags
If you are not about to take part in the Vienna City Marathon, then a street smart visitor to Vienna does not wear a bag tied around their middle. Because in Vienna this is associated with a ticket inspector in public transport. So don’t be surprised if you suddenly find yourself alone in the tram.

Museums, palaces, theatres, cafés and other important institutions rub shoulders with each other here.

Being thirsty is not always bad: drinking is healthy

Drinking is important – that is something which has been known for a long time. But in the only metropolis in the world where excellent wine is cultivated on a large scale, people are not always just talking about the (equally outstanding) mountain spring water. The Viennese coffee house is also something which people celebrate with pleasure.

“Heurige” – that can mean either the freshly pressed wine or the tavern in which you can enjoy it. The “melange” - a cup of coffee with frothed milk - is also something typically Viennese so don’t call it a “Cappuccino” (yes, there is a difference!). And the glass of water which is served with it is also something special because the water comes directly from the mountains.

A “G’spritzter”…
… is always in season and has two completely different meanings. If used in the culinary sense, then people are talking about the very pleasant mixture of wine and sparkling water (also known as a “Spritzwein” or a “Spritzer”).
The other meaning is less pleasant and can probably be best translated as “idiot”. A “G’spritzer” in that sense could therefore be somebody who still doesn’t know how to order a “G’spritzten”!

In the coffee house
The coffee house in Vienna is a very prestigious institution because, more than 100 years ago, its regular guests were the so-called intellectual elite and the “coffee house literati”. People liked to sit there for a longer period of time and didn’t rush off to the next “point of interest” – because the coffee house is per se such a point!

Tap water from the Viennese Alps
In Vienna and the surroundings people enjoy drinking the tap water because it comes from the Viennese Alps (although these actually lie in the province of Lower Austria). Therefore people in the know fill up their bottles with water in the hotel, rather than buy the over-priced plastic bottles on sale at the main tourist attractions.

If people go to a “Heuriger” or wine tavern in Vienna, then it is not simply just to drink wine. They expect the typical Viennese convivial atmosphere, dim lighting, a hearty down-to-earth “Heuriger” buffet, a “G’spritzer” (white wine with sparkling water) and some lemonade. By the way, in a traditional Viennese wine tavern you fetch the food yourself from the buffet. And a real “Heuriger” always has a bushy bunch of fir twigs hanging above the door – that is the sign that it is open or “ausgesteckt” (which literally means the twigs are “stuck out”!). 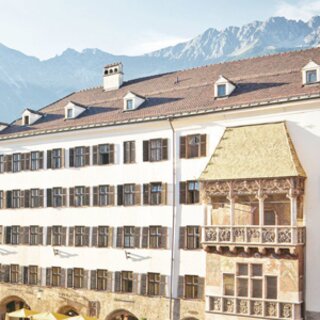 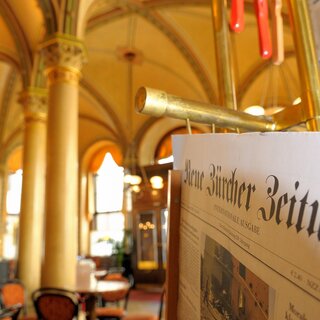