Be honest! When was the very last time you were in Schönbrunn Palace? Especially now, in early spring, when the baroque gardens are in blossom and sweet little baby animals see the light of day for the first time in Schönbrunn Zoo, it is a real attraction. I am well aware that the imperial palace of Schönbrunn is not only the most popular sight amongst all visitors to Vienna, but also amongst all visitors to Austria, which means there are always lots of people there. Nevertheless, there is always a good time to come and visit Vienna - either for those interested in culture or for the whole family. There are so many other attractions besides the palace that are simply "worth experiencing". For me, for example, the palace gardens are one of the most beautiful places to run in all of Vienna and many small "culinary stations", such as Landtmann's café, have a really nice guest garden for a short refreshment break in between.

Besides the history of the palace, I have also unearthed some anecdotes that I don't want to keep from you. Even more than 100 years after the collapse of the Danube Monarchy and the departure of the imperial family, Poldi, the palace spirit, still lives within the baroque walls and always enjoys it when children visit the integrated children's museum.

The history of the palace and its park dates back to the 14th century and was originally used by the imperial Habsburg family as a hunting lodge, as well as for summer excursions by the Viennese court. After several periods of devastation in the 17th century - first by invading Hungarians, then by the Turkish armies - Empress Maria Theresa acquired the estate and had it converted into a magnificent Baroque rococo style summer residence for the imperial family. During the summer months she, her husband and their 16 children were followed by a court staff of supposedly 1,500 people. The Empress was also responsible for the construction of the beautiful Gloriette with a view of the palace. It once served the monarchs as a small excursion destination, but also as a festival hall. Another anecdote says that Maria Theresa enjoyed her breakfast there very much and that this was the real reason for the construction of this magnificent building.

Would you like to reside in the palace like an emperor and empress and enjoy the palace park alone for a whole night? The Austria Trend Hotels Grand Suite in Schönbrunn Palace will make this dream come true for you and it is said that you get - besides a truly imperial service - the key to the palace park exclusively on top!

Schönbrunn is the largest palace in Austria and, along with the roughly 160 ha park, has been a UNESCO World Cultural Heritage site since 1996. Many of the 1441 rooms (I wonder who counted them?) belong to the museum and can be visited on two different tours, which I would definitely recommend to you!

A historic glance behind the scenes

Schönbrunn Palace as a leisure and nature attraction

The baroque park is at least as attractive as the palace itself! The gardens (the Great Parterre) were commissioned by Maria Theresa and date from the 1770s. The baroque garden and park comprise not only 32 mythological statues, but also numerous fountains and other gardens. These include a maze, a small oasis for playful relaxation. There are also some anecdotes about this.

The park of Schönbrunn Palace is one of the city's most popular recreational areas and is a true paradise for a relaxing walk. Don't forget your camera, because you will find countless photo and selfie motifs. I myself love the park on Sunday morning as it is a perfect place to run in the middle nature.

The whole palace park as a relaxing oasis

Tired after your tour of the palace, as well as the extensive programme of exploration in and around the palace gardens? Then it is time for a short break, be it a culinary tour of discovery in a horse-drawn carriage, coffee and cake in a typical Viennese café or even dinner before a concert with the sounds of Strauss and Mozart.

The emperors and empresses of the Habsburg monarchy were already renowned for their sense of enjoyment. The garden pavilion in the zoo was said to be a popular breakfast location for the imperial family and I could unveil a few culinary secrets: Empress Maria Theresa liked her coffee at breakfast with orange liqueur while Empress Sisi always insisted on her beloved candied violets with her piece of cake.

Imperial enjoyment with all our senses 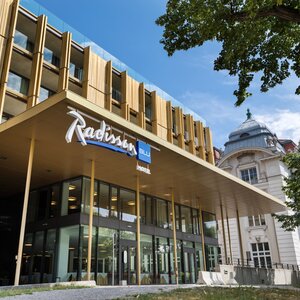