If you are simply one of the theatre guests, you of course enter the k.u.k. Hofburgtheater - the former imperial theatre – through the heavy, narrow doors of the main entrance on the Vienna Ring. There, in the foyer, you can pick up the tickets you ordered, browse the bookshop and drink a glass of sparkling wine or a “Spritzer” before the performance. That’s what I have done for decades. But this time though it is a little bit different. For the first time I enter the "Burg", as it is called by anyone in Vienna who is theatre-affine, through the sacred stage door.

Well, it is only really "sacred" for me as a lover of the theatre – inside with the concierge, everything seems very comfortable and above all friendly. Here people greet each other and gossip about what’s going on - is that already the so-called "grand family of the Burgtheater"? What we normally get to see from life in the theatre is the ensemble, perhaps the public service - but what we don’t get to see is what happens behind the scenes of this big company day and night to ensure that a production is staged just as the director imagines it.  Normally.  Today I get to see a little bit more - exclusively, so to speak. 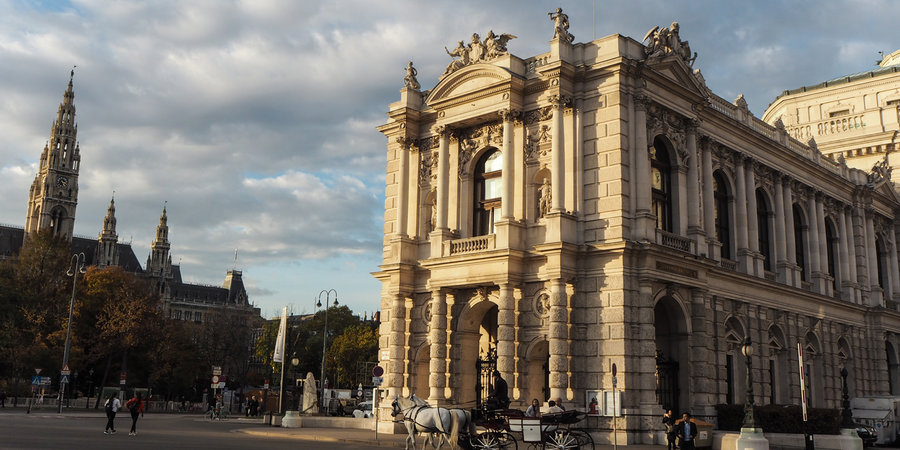 Vienna City Hall and the Burgtheater

During this special tour behind the scenes, under the stage and up in the famous flies, Karl Heindl, the head of Public and Security Services, shows us his kingdom. Yes, it is his kingdom, because he has been working in the “Burg” for more than 30 years – apart from a small break in Japan. He knows everything and everyone here – and he lives for his job.

Karl Heindl goes ahead into the underworld and tells of the nimbus of the Burg as THE German-speaking theatre under Joseph II and the later move from Michaelerplatz (beside the “Burg” or “palace”) to the then completely new location on the Ring, Vienna’s main boulevard. However, the actors were more than dissatisfied with the acoustics and once again a Burgtheater scandal was looming: "Tear it down again" - with such structural shortcomings in the "new giant theatre", it would be impossible to work in such a "beautiful monster", as the actor Hugo Thimig claimed. "It sounds as if the actors were speaking on the beach” was one criticism of the resounding acoustics in the auditorium; even the magnificent baroque interiors and Klimt’s paintings on the ceiling could not distract from it at first.

Today the Burg is still the setting for one or the other theatre scandals - the appointment of the director is always a topic in Vienna, but there are no more technical problems. On the contrary: when a director comes up with new ideas, you never say "no" here, anything is possible in the Burg, says Karl Heindl proudly and you really believe everything he says. 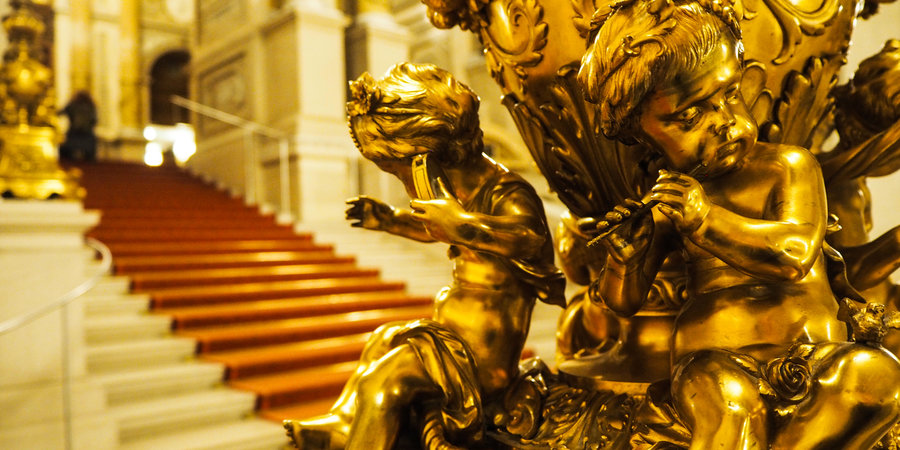 Those who work here and behind the scenes usually see a play from its creation to the last curtain, know the preferences of the directors and gossip with the actors in the canteen or behind the stage.  It used to be different - the old-established actors at the Burg got the dressing rooms with the best view and were little (or big) demigods like Charlotte Wolter, later even bitchy stars like Adele Sandrock or real audience favourites like Alexander Girardi.

And what is it like today? Today it is perfectly clear that every one of the 450 employees in the Burg is at least as important as one of the 65 ensemble members. In the evening there is a performance and most of them work on call: from seven in the morning until after 11:00 pm, when the last guest has left. Nevertheless, it doesn’t matter who goes past, they are always greeted politely. Standing here with my camera and probably an open mouth, I am certainly more than once in the way of people at work. But even then, everyone is friendly. 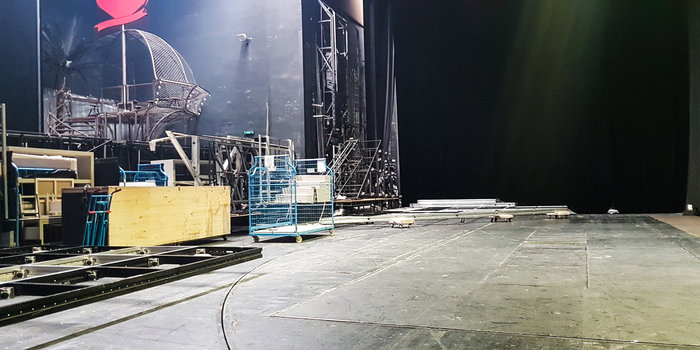 Behind the Scenes at the Burgtheater 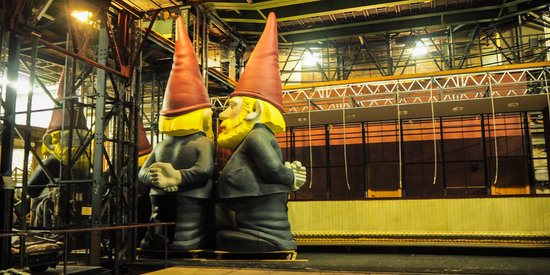 What we see above the street level of the theatre is only a small, structural part of the mystery of the Burgtheater. It all really happens underground and on several levels. From the stage entrance we go along the canteen to the freight elevator, which takes us to the lower stage: 8.82 metres below the stage area we are now looking - theoretically - directly into the audience. In this case, however, we look directly at the gigantic dwarves, who are already legendary props of the current "Der Volksfeind" production. They are waiting down here for their performance.

Nowadays this is possible with the rotating and retractable lifting platform. In 1888 the stage technology was not so quiet. The pulley was noisy and the fine actors and actresses didn't like that at all, because their ingenious acting was disavowed by such inferior background noise.
In the past, only a water hydraulic system was silent. And this is why in Vienna the famous high spring water from the Viennese Alps is not only drunk, but could once also be found in huge water collecting basins under the stage of the Burgtheater – this meant that the lifting platforms could be moved as if by magic and there was no disturbing technical noise. 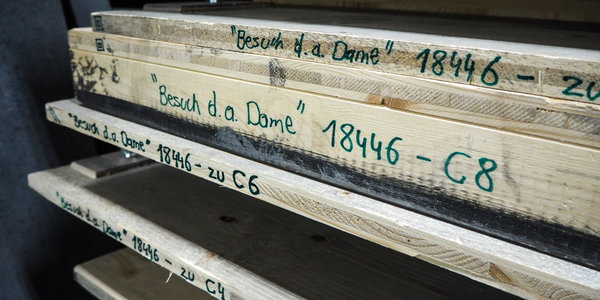 The tour continues past technical rooms and storerooms to a huge room with scenery, most of which is meticulously labelled. Here you can see the hard work goes into the productions before we see them on stage. By the way, we are under the parking lot in front of Café Landtmann, so the Burgtheater doesn’t just go into the depths but also covers a vast area. Incidentally, the fresh air in the auditorium is fed in from the neighbouring Volksgarten. Personally though I have to say: at the top of the gallery you don't notice much of the fresh air. 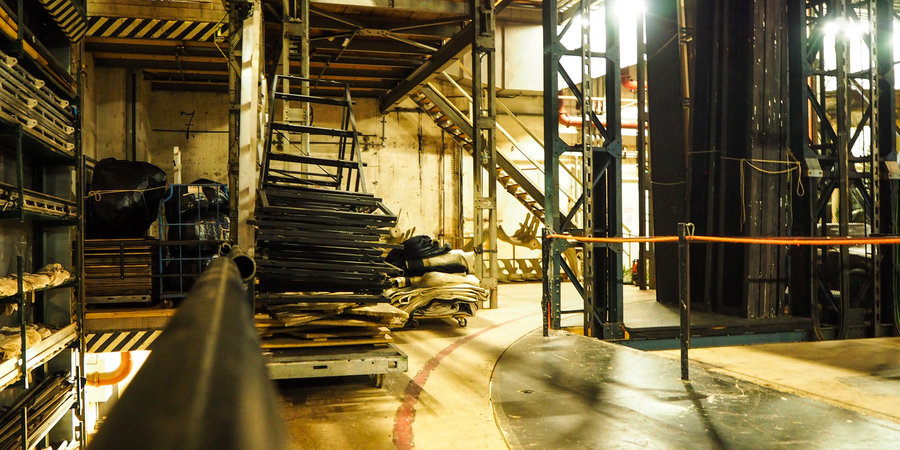 Up to the dizzying heights of the Burg 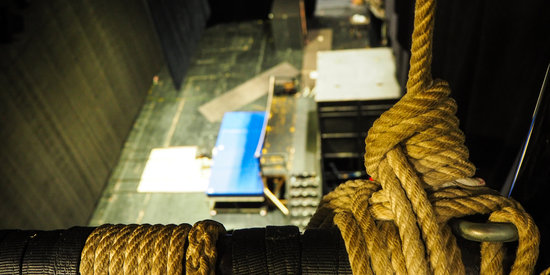 Speaking of upstairs: the lift takes us up from the very bottom to the very top – to the flies or gridiron. The view from up here to the back of the stage is simply breathtaking for me as a theatre fan. How many theatre lovers actually have a chance to stand on the Burg’s gridiron? Here, at a height of 28 metres, everything comes together - 600 lamps, light control computers and many ropes, all of which can still be operated manually (but nowadays back-friendly!  And 850 control circuits. By the way, the curtain weighs a mere 400 kilos.

Finally we hear the stage manager, who was just on stage with the main actor: "The group of visitors please come on stage" - wow, I am being called to the stage of the Burgtheater. Behind the stage there is a hustle and bustle: stage manager, sound engineer, assistant director and numerous stage workers do their daily work. Everyone is still friendly, although we are obviously standing in the way. But we push even further into the inner life of the Burg - up to the dressing rooms of the actors, where the costumes for the evening performance are already ready. The actors themselves don't have to worry about these things, but just have to relax and concentrate in their dressing rooms.

100 years ago this would have been impossible: I’m standing in the dressing room of the leading actors, seeing the costumes, the clothes and all the utensils for the show. In the stage house people orientate themselves according to the Landtmann side to the left and Volksgarten to the right: the gentlemen have their dressing rooms to the left, the ladies to the right. And in the cafeteria they all meet up together again: the many stage workers, the actors, the dramaturges and assistant directors - the extended Burgtheater family again. 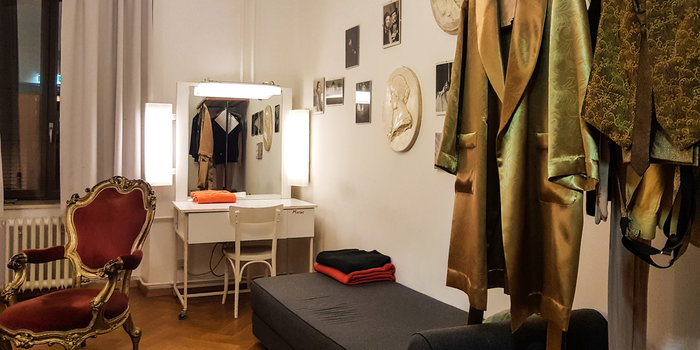 I take a last look at the "curtain call plan" hanging on the doors to the stage. Then I step through an inconspicuous side exit into the red upholstered rooms that I have known for decades: into the audience corridors that lead to the stalls. Suddenly I am back in another world, that of the spectator. Too bad, far too bad.

Some more photos of the really great guided tour which gave me a new insight into the Burgtheater: 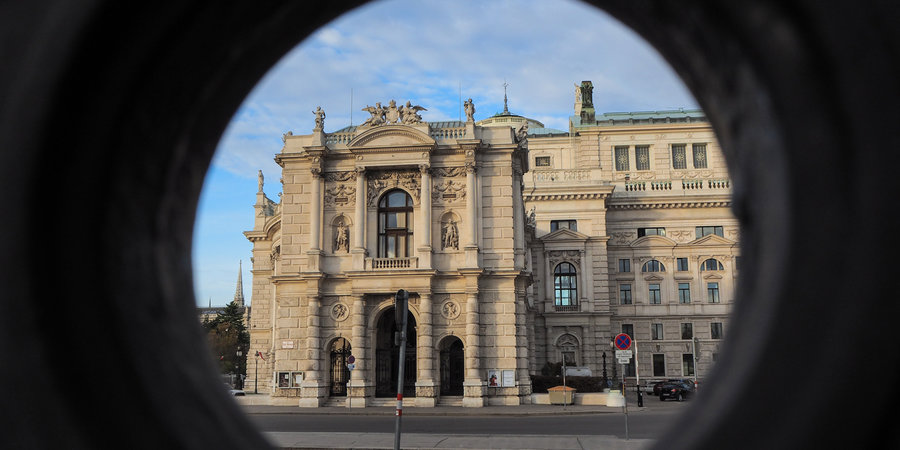 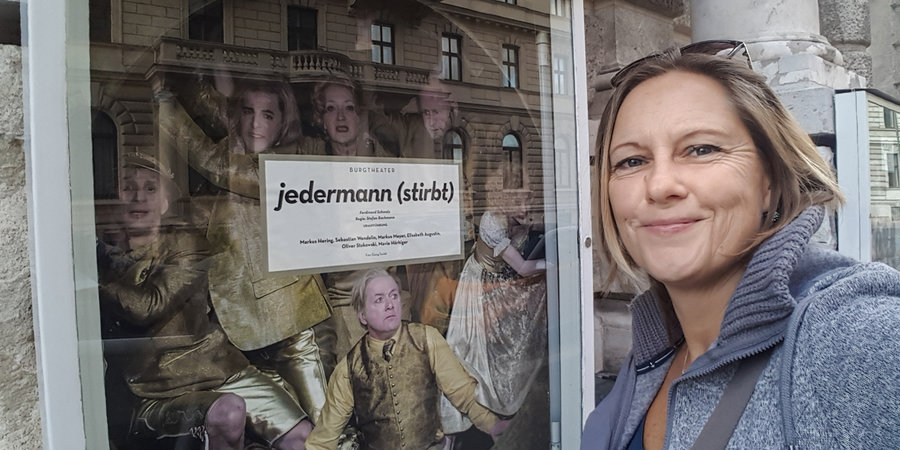 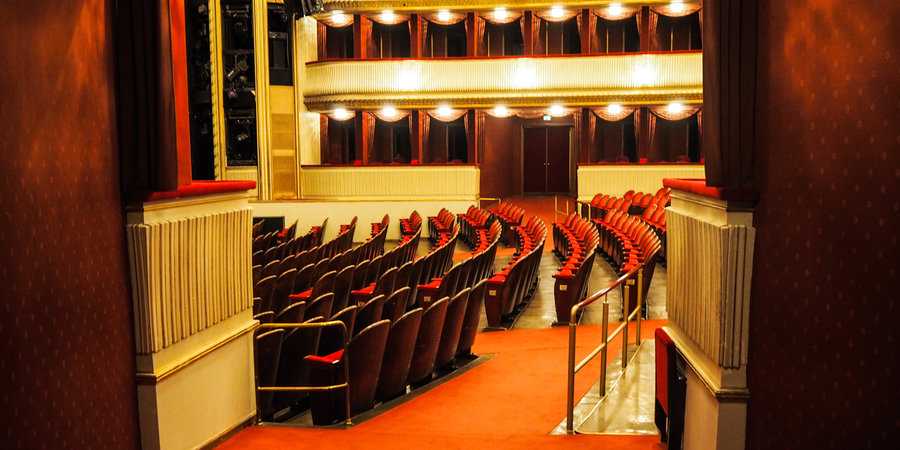 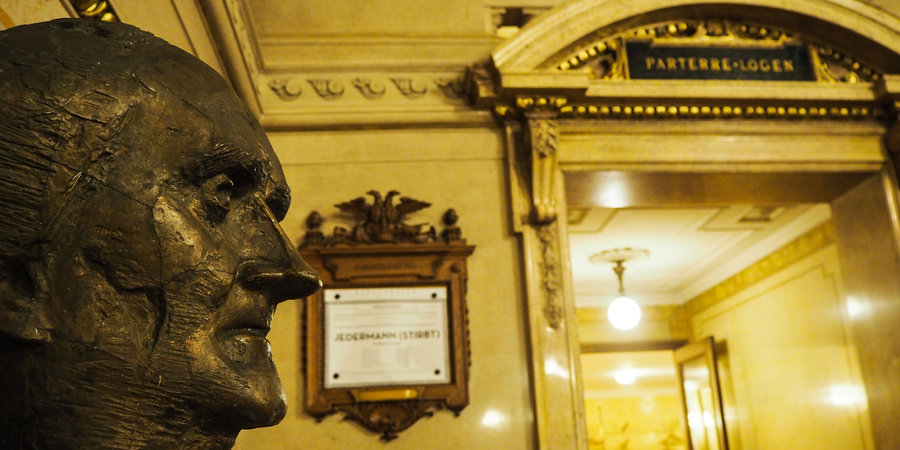 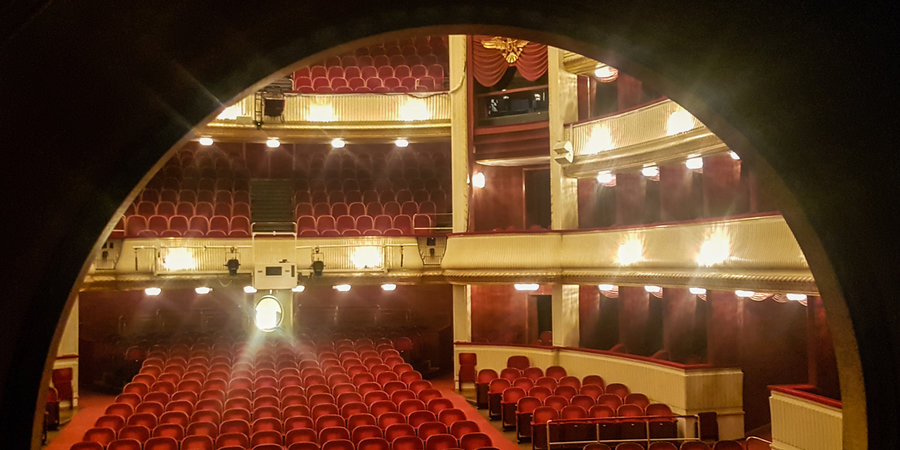 As an appendage to such an exciting tour I would definitely suggest getting to know another prestigious Viennese cultural institution from another perspective. And there I mean from a culinary point of view! See here which wonderful cafés and restaurants are housed in some of Vienna’s museums and enjoy coffee, cake and more amidst the works of the great masters.

Cafés and bistros in Vienna's museums

Whether for a small snack in between, for coffee and cake or lunch, these museums offer delicious refreshment for everyone.

It doesn't always have to be Viennese cuisine, or a Viennese pub! The following dining options are at least as beautiful as Vienna's restaurants.